Are you planning to go camping in the Doubs? Don’t hesitate to choose the city of Besançon, renowned, among other things, for its charm, its setting and its watchmaking. As part of your camping holiday in Besançon, you can take the opportunity to explore the Comtoise capital. Between its green spaces, museums and citadel, France’s first green city is sure to surprise you.

Activities during your camping stay in Besançon: what to see and what to do in Besançon?

What to see in Besançon? If you are a true nature lover, a history buff or an architecture or art lover, the answer to this question may vary! Here are a few ideas of what you can do in Besançon during a camping holiday in the Doubs.

Discover the citadel of Besançon

An imposing structure overlooking the city, the citadel is one of the must-sees of a tourist stay in Besançon. Built by Vauban, a military architect who lived between the 17th and early 18th centuries, it is listed as a UNESCO World Heritage Site and is one of the most majestic citadels in France. With a total of 10 kilometres of ramparts dotted with half-bastions, towers and other guardhouses, the citadel of Besançon is Vauban’s masterpiece. The parapet walk, 600 metres long, 5 to 6 metres wide and 15 to 20 metres high, is a beautiful walk with breathtaking views of Besançon and the surrounding countryside. Inside the Citadel, the Saint-Etienne chapel now houses a sound and light system projected on giant screens. This immersive device lets you relive the history of the citadel, from the battles to the major construction works. Three museums also await you within the walls of the Citadel: the Resistance and Deportation Museum, the Comtois Museum (regional ethnography museum) and the Museum which brings together a zoological garden and a museum of life and earth sciences.

Explore the green spaces of Besançon

If Besançon is designated as France’s leading green city, it is notably because it has an average of 200 square metres of green space per inhabitant! Thus, greenery occupies nearly 30% of the city’s surface area. In particular, you will be able to escape to the heart of the vegetation in the Chailluz forest. Covering 1,780 hectares, this forest on the outskirts of the town offers you the opportunity to see deer, wild boar and fallow deer at close quarters. Picnic areas and footpaths have been created.

The Micaud walk, designed in English park style, with paths lined with paulownias, sophoras and tulip trees, is also worth mentioning. Micaud Park offers a splendid panorama of the Citadel. Moreover, at the Gare d’Eau, a former cargo port with marshes, you will find a vast green area with a promenade where you can spend some good time alone or in a group.

Finally, as part of your stay in Besaçon, explore on foot or by bike the 5 km of banks along the Doubs. A beautiful walk that mixes nature and heritage. 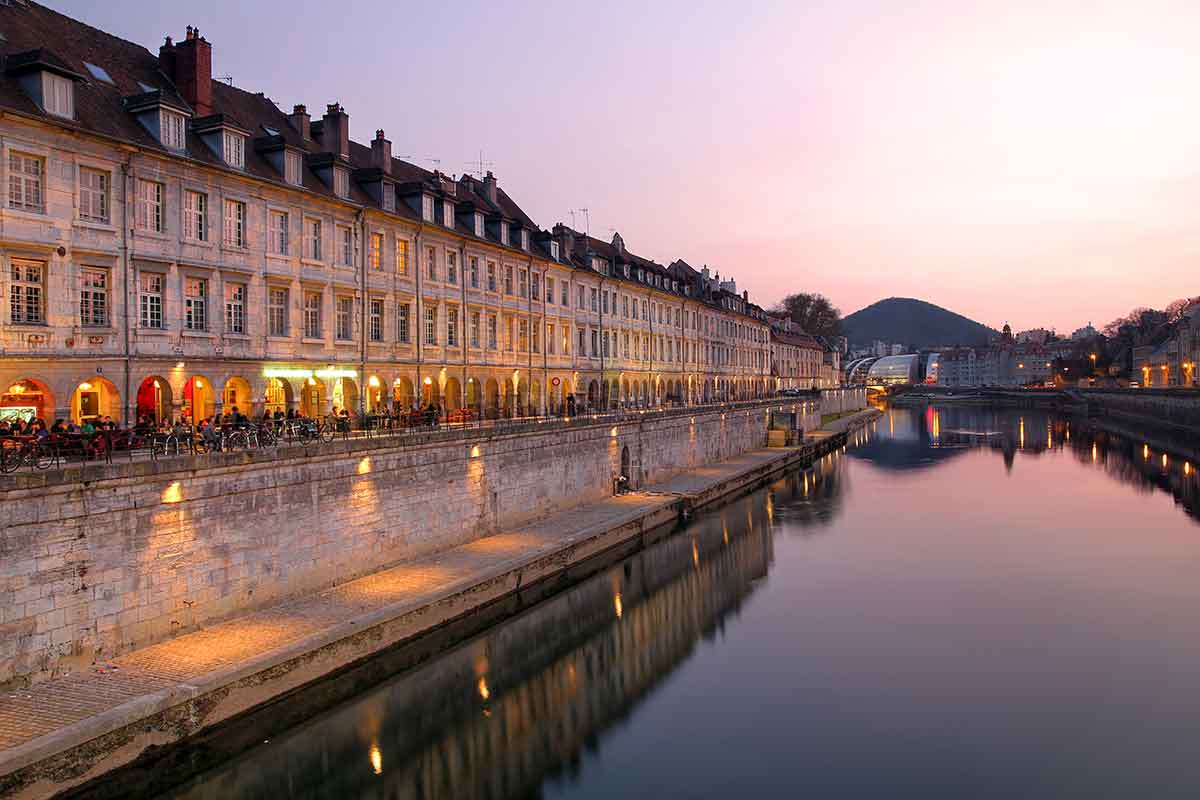 Dive into culture and history through Besançon’s museums

You can also discover Besançon by visiting its various museums. Start this dive into Besnaçon culture with a diversion to the Fonds Régional d’Art Contemporain (2, Passage des arts), where you will also find the Besançon art museum. There you will be able to admire an old brick river building, as well as various exhibitions throughout the year.

At the Time Museum, you will plunge into Besançon’s rich watchmaking tradition! Indeed, until the 20th century, 90% of the watches sold in France came from Besançon. The time museum is therefore the symbol of this know-how specific to the capital of French watchmaking. Located at 96, Grande Rue, at the level of the Granvelle Palace, this museum houses multiple collections of time-measuring instruments. These include the Leroy 01, one of the most prestigious watches of all time, and the Foucault pendulum, which materialises the rotation of the Earth in real time.

You can also visit the house where Victor Hugo was born (he lived there for 6 weeks when he was born), which has been transformed into a museum. A modern setting allows you to discover the subjects and struggles that dotted the life of the French writer and politician. In this flat at 140, Grande Rue, there is a room dedicated to children’s rights, a room dedicated to artistic freedom, etc. 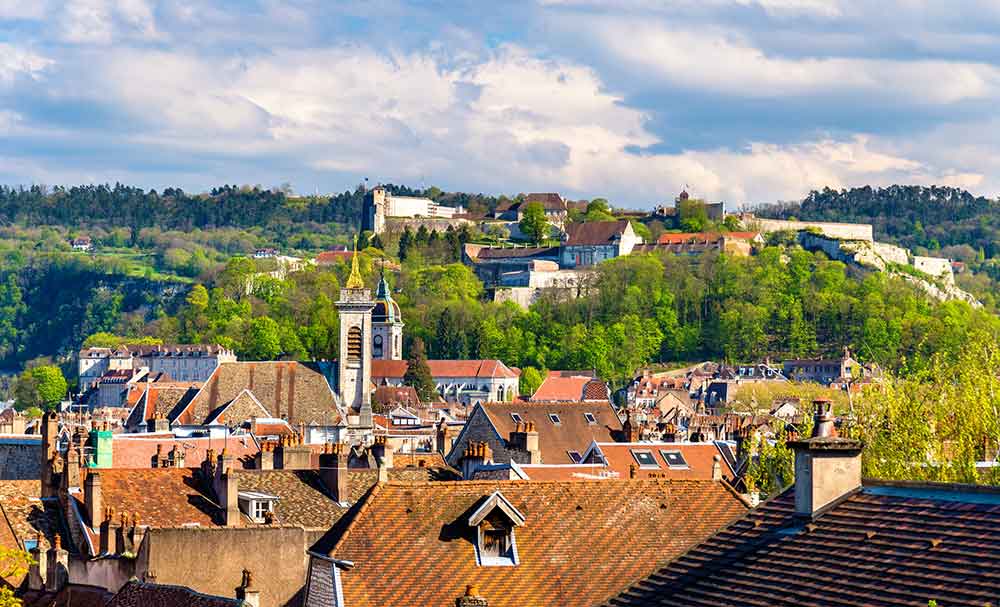 Between 2 nights at your campsite in Besançon, think about taking a tour of the old Besançon which includes the rich architectural heritage of Besançon. Especially at the “Boucle”. “La Boucle” is the nickname given to the historic heart of Besançon nestled in a meander of the Doubs. With almost 200 historic monuments spread over 238 hectares, it is the second most protected area in France. A stroll through its pedestrian streets will allow you to admire sumptuous facades, beautiful fountains or atypical hidden courtyards. Its private mansions are also worth a visit. Among them, the Hôtel Jouffroy, the Hôtel de Champagney or the Hôtel de Lavernette are worth a visit. 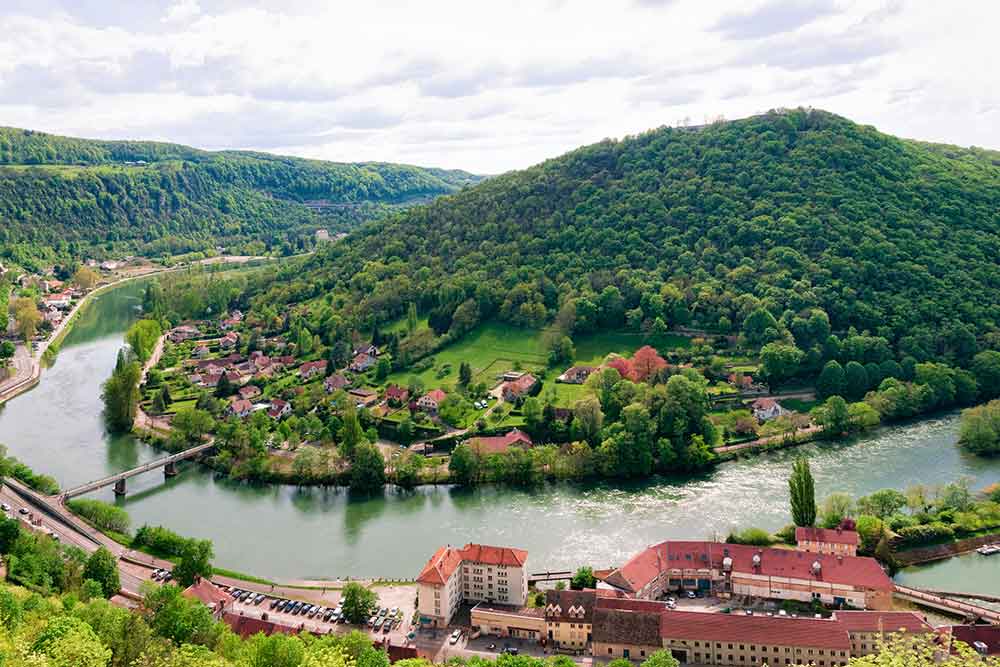 If your walk begins towards the Battant Bridge, you will be treated to the beautiful sight of the arcaded houses on the Quai Vauban. In the highest part of the Battant district, where the bridge is located, go to Fort Griffon to enjoy a panoramic view of the Besac, its bell towers, the surrounding hills, etc. from a wide angle. As you wander through old Besançon, don’t hesitate to push open the doors to discover the inner courtyards, with their remarkable outside staircases (historically, the staircases were arranged outside so as not to cut off the interior space).

About 16 metres high, the Porte Noire is a sort of triumphal arch, whose construction dates back to the 2nd century. Originally designed to celebrate divinities and victories, this Gallo-Roman monument was damaged over time, before being renovated to become one of the most beautiful buildings in Besançon today. Its columns decorated with vegetal motifs make its charm.

Located not far from the Porte Noire, the Saint-Jean Cathedral has also undergone multiple renovations. Today, it is one of the rare French cathedrals to have two opposing choirs, mixing several architectural styles (Romanesque, Baroque and Gothic). As a further testimony to the historical bisontinental know-how in clock-making, the cathedral of Saint-Jean in Besac houses an astronomical clock. Made in the 19th century under the supervision of Auguste-Lucien Vérité, a famous French watchmaker, it is hand-wound every day. In a millimetre-diameter mechanism, which you can observe from the inside during a guided tour, it operates the five dials of the cathedral.

There is something for everyone in Besançon. So don’t miss out on a visit to the capital of French watchmaking during your next camping holiday in the Doubs.

A selection of campsites for tents, caravans and motorhomes in Besançon or nearby.

Campsite in Normandy near the D-Day landing sites

Camping le Vézère Périgord
24620, Tursac
Not too big campsite with many extras
The Vézère Périgord is an ideal base for numerous visits
www.levezereperigord.com
Dordogne, Nouvelle-Aquitaine
12...169 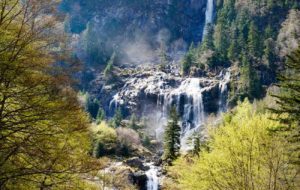