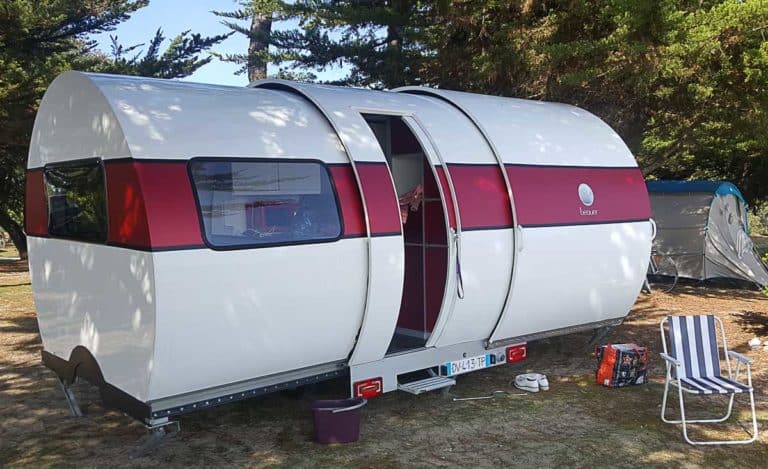 A manufacturer of handmade and expandable caravans. Enough to motivate a trip to Cholet, in western France, to visit the Beauer caravan factory.

The Beauer caravan factory is located on the outskirts of Cholet. Here, in a small hangar are created caravans among the most innovative on the market, the 3x and the 3x+. Two expandable caravans, which, unfolded, offer surfaces of 12m² and 28m². But we’ll come back to that later… Before being a nice product, the Beauer caravans are a beautiful man’s story: Eric Beau, their inventor whom we met in his workshop.

Eric Beau had no camping experience. A lover of vintage cars, he wanted a vintage caravan with rounded shapes to compose a nice hitch with his cars. But he did not find any. Or overpriced. This engineer by training and his father decided to build their own caravan.

“The specifications were simple, explains Eric Beau, a 1960s look, round, small, but workable by 4 people at the stage. So the only solution was for it to be expandable”

He therefore creates the concept of his caravan with a rocking floor that allows to multiply the volume of the caravan by three when it is unfolded. During a summer, he built his first caravan with his father. The adventure had to stop there, but the caravan has experienced a real craze with word of mouth. A success confirmed when he presents his prototype on a few shows, including the Paris Caravan Show. So he decided to start his own business. At first, he entrusted the complete realization of his caravans to a subcontractor and then set up his workshop on the outskirts of Cholet.

The team now has 6 people who produce about 2 caravans per month. The caravans are entirely made in Cholet’s workshop. About 50% of sales are exported, mainly to Switzerland or Germany. Although it has won awards on the British market (The Caravan Club’s Award for Best Design to the 3X+ in 2019), it remains closed to the concept for the time being. However, he can be proud to have sold several in Australia and even Korea or China. For the time being, the North American market remains closed due to certification. Too bad because it is hundreds of requests for purchases for his caravans that Eric Beau receives every year from the United States. The slide-out is indeed part of American culture.

It must be said that Eric Beau is a special seller. It has no point of sale or dealership. He is only present on social networks, his websites and few shows. “Customers come to me,” he says. “It’s a crush purchase.”

Beauer currently offers two caravans. A small model that, unfolded, offers an area of 12m² and a large model that offers it 28 m². That’s as much as a mobile home! While remaining towable on the road. A seductive concept for those looking for space!

Its big sister, the Beauer 3X+, pushes the walls even further. With an empty weight of 1800 kg and a weight in charge of up to 2500 kg, however, it requires a relatively powerful vehicle to tow it. Its dimensions are 2.9 m high, 6.65 m long and 2.05 m wide. When unfolded, it always offers a habitable height of 2 m but a width of 4.8 m, or an area of 28 m². A real mobile home! It has two separate bedrooms with a double bed and two single beds and a living room. Ideal for a family holiday in a caravan! Price: 69990 €.

Both models are designed on the same system with automatic deployment. Just turn a key and one minute the caravan is unfolded.

In addition to the two 3X caravans, Beauer now offers a very interesting layout for vans (and even for small volumes such as Berlingo or Kangoo). In a few days, we will be presenting an article on this new product. And, by the beginning of 2021, the brand will arrive with a new concept halfway between the campervan and the caravan on which we will also return.

La Roche de Solutré in the middle of Burgundy vineyards

Camping de la Plage
29950, Bénodet
Its location 300 m from the sea and its environment
Its aquatic complex
www.campingdelaplagebenodet.com
Bretagne, Finistère
12...170 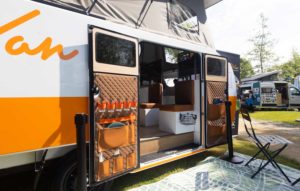