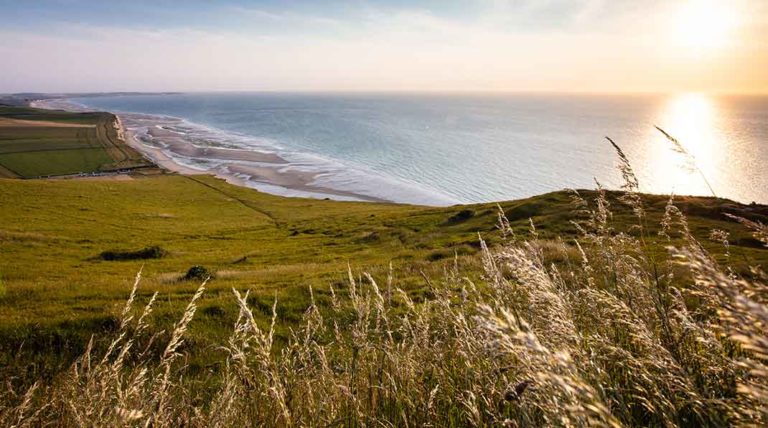 Compared to more southerly destinations, the beaches of northern France do not always get the attention they deserve. This is a mistake! The Opal Coast has some of the most beautiful seashores in France. In particular around the Caps Blanc-Nez and Cap Gris-Nez. A must-see during your camping holiday in the Hauts-de-France.

Since 1987, the Deux Caps site has been part of the Grands Sites de France, in the same way as the cirque de Navacelles, the Gorges du Verdon or the city of Carcassonne. It is well deserved. These two Capes make up a magnificent landscape and offer many possibilities for walks, whether on the beach or on the top of the cliffs.

10 kilometres from Calais, the Cap Blanc Nez awaits you. Its 134 metre high cliff is the most northerly cliff in France. The white cliffs of Dover can be seen in the distance. From the top of the cliff you can enjoy a superb panorama that includes Cap Gris Nez, the English coastline, the green, rolling countryside of the hinterland and the constant flow of boats. The narrow inlet that separates Britain from the continent is one of the busiest shipping routes in the world. There are, of course, the ferries that run back and forth between Dover and Calais, but also the many commercial ships that sail between the Atlantic and the northern European ports of Rotterdam, Hamburg, Antwerp, etc. Some 200,000 ships pass through the Strait every year. A surprising ballet! The Cap Blanc Nez takes its name from its white colour due to the chalk that makes it up. Some people are content to discover Cap Blanc Nez from the top of the cliff, but it is advisable to go down to the beach. At the bottom of the cliff, it is a completely different landscape, but just as exciting. There are several ways to get to the beach. You can park in the car park at the top of the cliff and walk down a path, or you can choose to park in the car park below, close to the beach. It is possible to walk to Cap Gris Nez from Cap Blanc Nez, which is 12 kilometres away, making a nice 24 km round trip. All along this itinerary, lookouts allow you to appreciate the landscape.

England has never been so close. It is indeed here that the strait which separates France from England is the narrowest at only 24 km. Although not as high as its neighbour (45 metres), Cap Gris Nez nevertheless offers beautiful views that include the white cliffs of Cap Blanc Nez, the village of Wissant and large sandy beaches.

The Deux Caps site is renowned for its natural wealth and for birdwatching. Cap Gris-Nez in particular is a Special Protection Area included in the Natura 2000 network. As the strait between France and England is located on a migration route, the site of the Deux Caps allows the observation of migratory birds as well as many breeding birds. Because of the narrowness of the strait between France and England at the Cape, it is possible to see pelagic species that are usually invisible from the coast. Terns, gravelers, egrets, spoonbills and even storks are just some of the species that can be seen around the Two Capes.

Between Cap Blanc Nez and Cap Gris Nez lies the bay of Wissant with its fine sandy beach. This beach invites to long walks, but also to sports such as windsurfing, paddle and especially sand yachting. With its 12 kilometres, this windy beach is ideal for sand yachting. A real speciality of the northern beaches. In the heart of the bay, the pretty village of Wissant, set against the Boulonnais bocage, awaits you. This fishing village became a popular seaside resort in the 19th century. It has retained the old-fashioned charm of the resorts of that era with a beautiful promenade lined with elegant villas. Wissant is not the only village worth visiting. During your camping holiday near the Deux Caps, don’t miss a walk to Wimereux, due to the Cap Gris-Nez. Its rows of beach huts give you a Belle Epoque atmosphere.

Our campsites near Les Deux Caps

A selection of campsites for caravans, motorhomes or tents near Cap Blanc Nez or Cap Gris Nez.

65 years ago, the VW Kombi Van arrived in Hanover

Converting your pick-up into a motor home

Camping in the Hauts-de-France 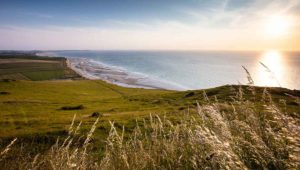 Camping in the Hauts-de-France